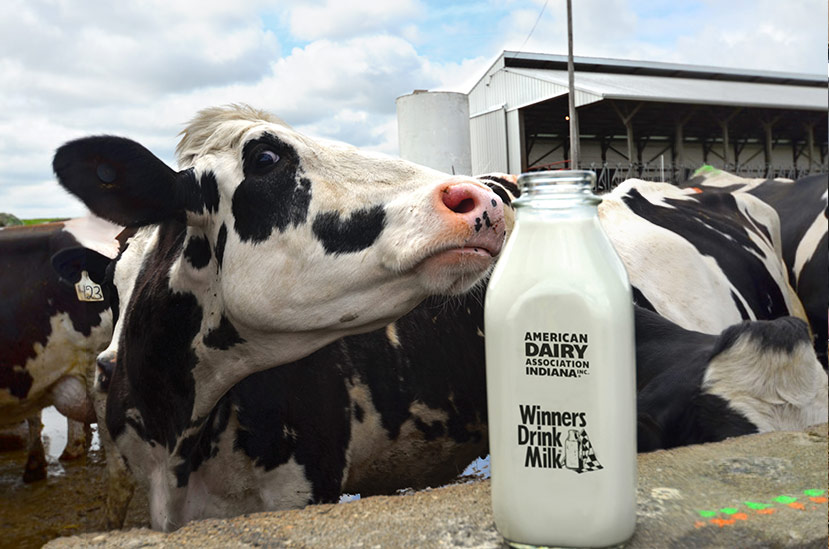 INDIANAPOLIS – Every driver in the 2014 Indianapolis 500-Mile Race will want to make the acquaintance of two Hoosier dairy farmers on Sunday afternoon, May 25.

And they’ll know exactly where to find them. Ken Hoeing and Alan Wright will be standing, cooler in hand, on some of Central Indiana’s most valuable real estate – Victory Circle at the Indianapolis Motor Speedway.

Hoeing, whose family milks around 400 cows on the 3000-acre Hoeing Livestock Farm near Rushville, and Wright, a fourth-generation dairyman whose 220-cow operation is near Muncie, are assuming responsibility for continuing one of Indianapolis’ most treasured traditions. The “Milkmen” will deliver the fabled Bottle of Milk to the winner of the 98th 500-Mile Race, courtesy of American Dairy Association Indiana (ADAI). Both Hoeing and Wright are ADAI board members.

“We are honored to be selected by our peers to continue the tradition that means so much to those of us involved in the dairy industry here in Indiana, as well as throughout the US,” Hoeing said. “We appreciate the support of this tradition by the Indianapolis Motor

Speedway and the Hulman-George Family, and recognize the important place it holds in the hearts of everyone who loves the Indianapolis 500.

“Nearly everyone, anywhere in the world, thinks of the 500-Mile Race when they hear ‘Indianapolis,’” Hoeing added, “and most also are aware of how every winner toasts victory at this great track. Alan and I take the responsibility of representing this tradition very seriously, and look forward to the great opportunity of carrying it forward come May 25.”

The legendary Louis Meyer, Indy’s first three-time winner (1928, ’33, ’36) is acknowledged as the driver who launched the Bottle of Milk Tradition when he asked for a glass of his favorite beverage – buttermilk – to quench his thirst after a grueling 500 miles in 1933. Three years later, Meyer was photographed in Victory Lane drinking milk. Milk was presented off and on during the next several years until, in 1956, the Bottle of Milk was made a permanent part of the post-race celebration by Indianapolis Motor Speedway owner Anton “Tony” Hulman.

2014 marks the 59th consecutive year for the beloved tradition – one that Ken Hoeing and Alan Wright intend to continue on May 25.